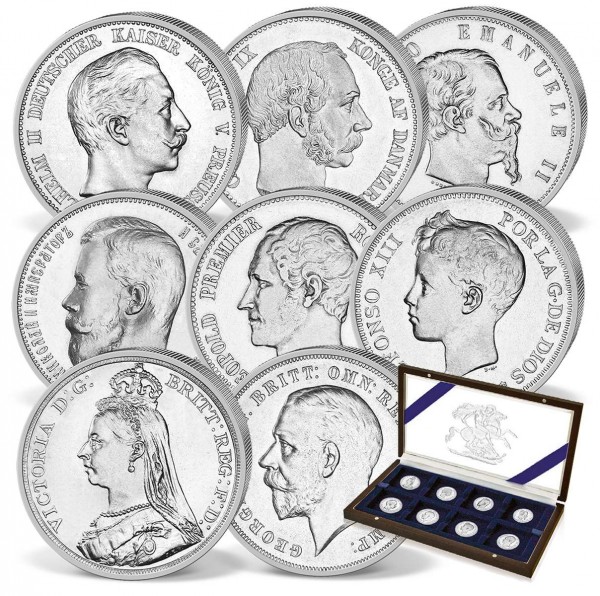 This product is currently not available.
Please inform me as soon as the product is available again.
Amount due: £899.00

Queen Elizabeth II's great-great grandmother, Queen Victoria (1819-1901), was not only one of the longest-reigning British monarchs, she was also nicknamed 'the Grandmother of Europe', becauseher children and grandchildren occupied the thrones of many European countries, so most European monarchs became part of her extended family, including Tsar Nicholas II of Russia and King VictorEmmanuel II of Italy. These two, together with six further monarchs, including Queen Victoria, form a unique and precious collection of genuine original silver coins - the 'Family Chronicles Queen Victoria'.

King George V - 1 Crown
George V was the grandson of Queen Victoria, he became King of the United Kingdom in 1910, succeeding his father King Edward VII. George V founded the House of Windsor more than 100 years ago, by royal proclamationin 1918.

King Alfonso XIII - 5 Pesetas
In 1906, Alfonso married Victoria Eugenie of Battenberg, the Scottish-born daughter of Princess Beatrice of the United Kingdom,who was the youngest child of Queen Victoria.

King Leopold I - 5 Francs
King Leopold I was the first King of the Belgians. In 1840, Leopold helped to arrange the marriage of his niece, Queen Victoria, to his nephew, Prince Albert of Saxe-Coburg and Gotha. Victoria described him as her 'best and kindest adviser'.

Queen Victoria - 1 Crown
Queen Victoria was Queen of the United Kingdom from 1837-1901. She married off her 9 children and 26 of her grandchildren into many of the royal and noble houses in Europe, which earned her the nickname 'the Grandmother of Europe'.

Tsar Nicholas II - 1/2 Ruble
Nicholas II was the last Emperor of Russia and his reign saw the fall of the Russian Empire. Queen Victoria's granddaughter, Alexandra Feodorovna (Alix of Hesse) married Nicholas II in 1894, and became the last Tsarina of Russia.