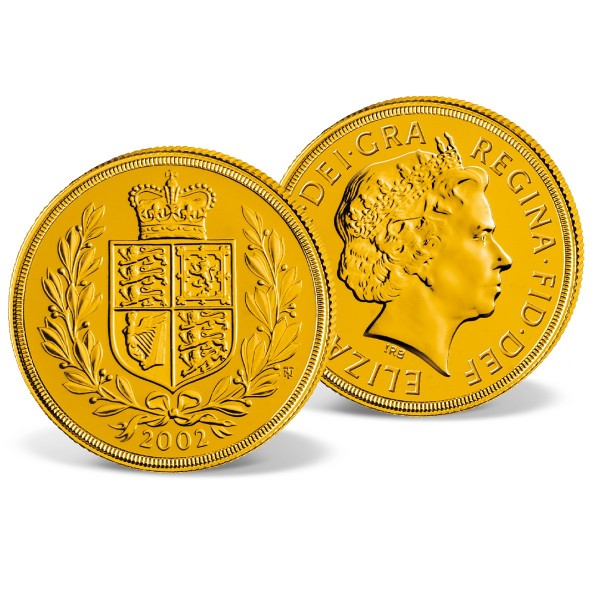 Description
Description
The Gold Sovereign is one of the oldest coins that is still being issued today. The coin... more
Close menu
'Elizabeth II' 1/2 Sovereign

The Gold Sovereign is one of the oldest coins that is still being issued today.

The coin is steeped in a rich and fascinating history - Henry VII commissioned the Royal Mint to produce the first ever Gold Sovereign in 1489, over 500 years ago. The Sovereign derived its name from its distinctive obverse which carries the portrait of the ruling monarch.

The Queen Elizabeth II 2002 Gold Half Sovereign was designed to celebrate The Queen's Golden Jubilee. The obverse features the fourth definitive portrait of Queen Elizabeth II, created by sculptor Ian Rank-Broadley. Unlike the earlier designs which highlighted the Queen's youthfulness during the early years of her reign, Ian Rank-Broadley's couped design depicted a mature portrait of Her Majesty. QueenElizabeth&nbspII is portrayed wearing the Queen Mary button stud pearl earrings and the 'Girls of Great Britain and Ireland' tiara. The reverse features the shield design created by Timothy Noad to honour the Golden Jubilee.

Secure your very own 'Queen Elizabeth II' Gold Half Sovereign, to celebrate The Queen's 95th&nbspbirthday in 2021.