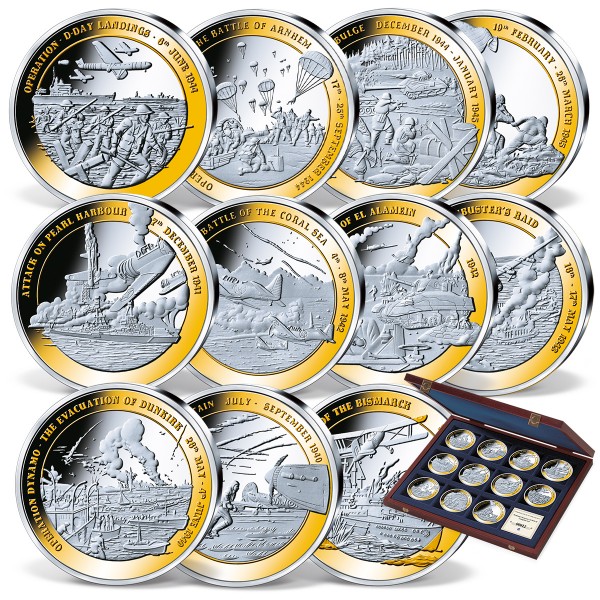 The 'Defining Moments of WWII' complete set is a stunning collection documenting the most significant moments of the Second World War.

Many battles will be forever engraved in our national memory, including the evacuation of our soldiers from Dunkirk and the German air raids, which tested the resilience of the British people. Prime Minister Winston Churchill became our national hero, with his uncompromising attitude towards Nazi Germany and his rousing speeches that inspired the nation to persevere and ultimately claim victory.

VE-Day was celebrated on 8th May 1945, when Winston Churchill officially announced the end of WWII in Europe. Across Britain people came together on the streets to celebrate the news that Germany had surrendered. Peace in Europe was restored and we willforever commemorate and remember all those who lost their lives in WWII.

The 'Defining Moments of WWII' complete set - in highest minting quality 'PROOF' and preciously layered with silver and 24-carat gold - features 11 stunning strikes commemorating the Second World War. This exclusive set comes in a luxury display case and is strictly limited to only 9,999 complete collections worldwide.