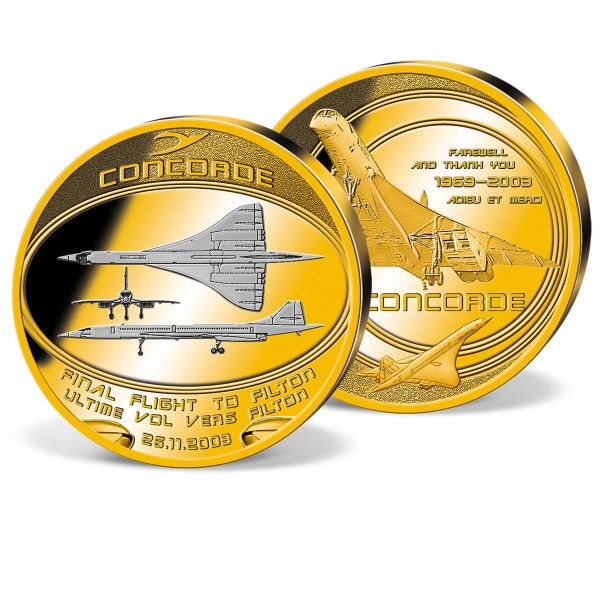 Description
Description
It was the end of an era - shortly after at 11am on Wednesday the 26th of November 2003 Captain... more
Close menu
'Concorde - The Final Flight' Supersize Commemorative Strike

It was the end of an era - shortly after at 11am on Wednesday the 26th of November 2003 Captain Les Brodie had the honour of presiding over the Queen of the Skies' very last flight, from her working home of London Heathrow, to her place of birth - the Airbus facility at Filton. Concorde's last supersonic dash around the Bay of Biscay signified the end of nearly three decades of faster-than-sound air travel, and the end of an icon, and a dream.

It is now nearly 60 years ago, that in 1962 a historic agreement was formed-the French and British aircraft industries joined forces to collaborate on developing a supersonic passenger aircraft. Interestingly the project's name was subject to some disagreement & international pride - the British government proposed the name 'Concord' meaning agreement, friendship, and cooperation. However the French president Charles de Gaulle officially announced the name of the project as 'Concorde' using the French spelling with an 'e'. The seemingly insignificant 'e' remained a bone of contention until 1967, when Tony Benn, the minister for technology, announced that Britain would adopt the French spelling and squashed nationalistic protests by proclaiming that the 'e' stood for 'excellence, England, Europe and entente (cordiale)'.