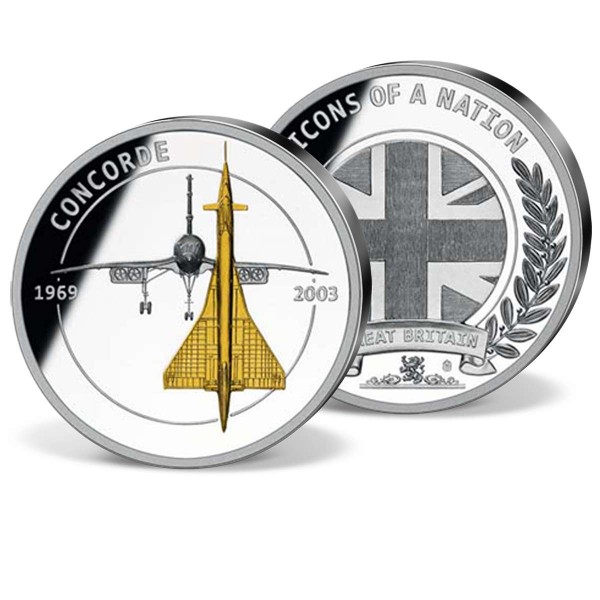 Description
Description
For those of us that remember the occasion, it hardly seems possible but it was over forty years... more
Close menu
'Concorde 1969 - 2003' Commemorative Strike

For those of us that remember the occasion, it hardly seems possible but it was over forty years in March 1969 that an icon of aviation was born and Concorde "The Queen of the Skies" took off on her maiden flight. Then on 1st October 1969 she made history by completing her first-ever supersonic flight.

A true design icon Concorde's sleek triangular wings enabled her to fly at exceptionally high speed - with a top speed of almost 1,554mph, she was faster than twice the speed of sound. In February 1996 with a flight time of 2 hours, 52 minutes and 59 seconds Concorde broke the record for the fastest transatlantic crossing in civil aviation history a record that remains unbroken to this day.

In total 20 Concorde jets were built and in October 2003, after nearly 35 years of flight and 25 years of passenger service, Concorde took to the skies for the very last time with a series of farewell flights from Heathrow, visiting Birmingham, Belfast, Manchester, Cardiff andEdinburgh. Soon after, the remaining Concorde aircraft were retired to their final homes in museums around the world.

In spite of not having graced our skies for seven years, we are still just as passionate about Concorde as we were 40 years ago - she is regarded as a marvel of technical innovation and the pride of two entire nations and was recently voted Britain's most respected designicon of the 20th Century.