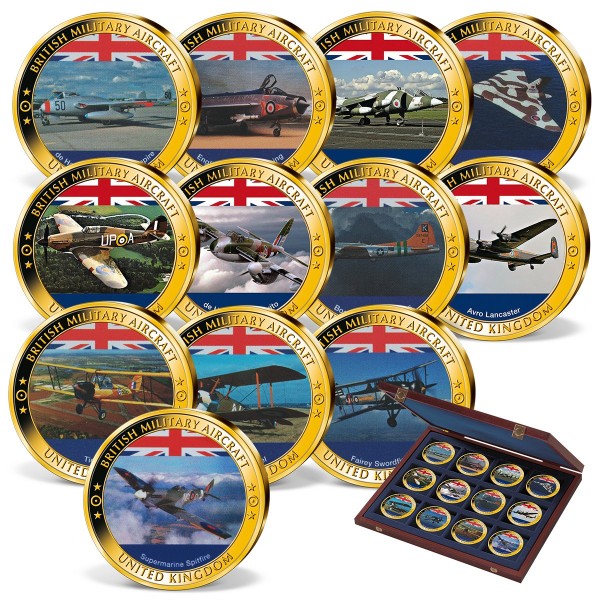 The Royal Air Force, formed a century ago, is the oldest independant air force in the world, and is known for their impressive aircraft. To celebrate 100 years of the Royal Air Force, the twelve most famous aircraft in the history of the RAF have been commemorated with stunning strikes, layered with 24-carat gold and officially authorised by the Ministry of Defence. Now, for the first time ever, these 12 strikes are available as a complete set.

Amongst the aircraft depicted are The De Havilland Mosquito, known as the 'Wooden Wonder', which served during WWII and was the fastest aircraft in the world at the time. The Avro Lancaster was Britain's most famous heavy bomber of World War II, and was used for the legendary Dambusters raid. One of the most prolific fighter aircraft of WWII was the single-seater Hawker Hurricane - around 14,000 were built during the course of the war. The Sopwith Camel was the RAF's most successful fighter plane of the First World War. Later, the jet-powered Avro Vulcan became Britain's airborne nuclear deterrent during the Cold War. The English Electric Lightning, later known as the BAC Lightning, served as an interceptor and was capable of Mach 2. Whilst the famous Hawker Siddeley Harrier 'jump jet' could take off and land vertically. Other successful aircraft included in this stunning collection are the Fairey Swordfish torpedo bomber, the heavy duty Flying Fortress, and the iconic Tiger Moth, the RAF's primary trainer aircraft.