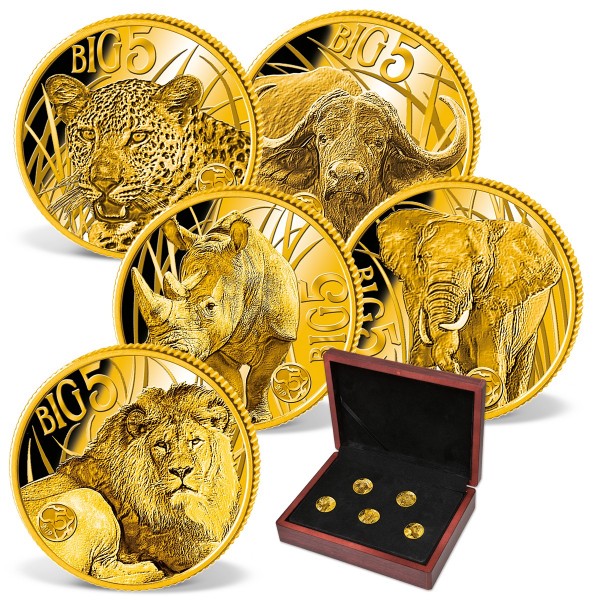 Please inform me as soon as the product is available again.
Amount due: £749.00

This significant collection is a homage to the 'African Big Five', a term introduced by early big game hunters to describe the five most difficult and dangerous animals in Africa to hunt on foot. These days the 'Big Five' has become a symbol of the African wildlife experience. Tourists and guides refer to the 'Big Five' as safari royalty - the five most sought-after African animals to see on safari.

The African Leopard
considered to be the most difficult of the 'Big Five' to see on safari, as these nocturnal hunters are solitary cats and traditionally elusive.

The Black Rhino
these large herbivores have dramatically declined in numbers and are now a critically endangered species.

The African Lion
the majestic 'King of the beasts' is the most famous of the four 'Big Cats'. These social animals are the only cats that live in groups, called prides.

The Cape Buffalo
considered by many to be the most dangerous of the 'Big Five', as a wounded buffalo will defend itself by attacking its pursuers.

The African Elephant
roaming across the Serengeti, the African elephant is the world's largest land animal in existence today.

Now you can enjoy Africa's most famous wildlife in a beautiful collection of five official gold coins. Minted in the highest quality 'proof' and in sought-after 11 mm miniature format, this stunning set of solid gold coins is a tribute to the five most magnificent and sought-after African animals. The 'Big Five' complete gold coin set comes withan elegant collector's display case and is strictly limited to only 1,000 sets worldwide - and there are only a few sets left!