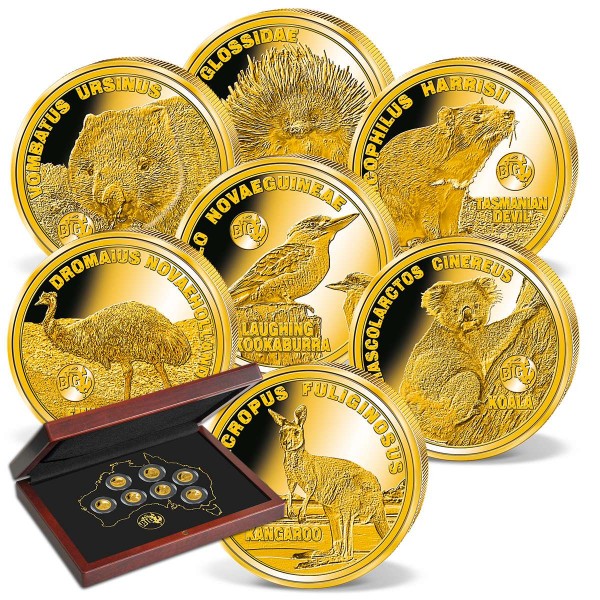 This product is currently not available.
Please inform me as soon as the product is available again.
Amount due: £1,259.00

Australia is the smallest of the world's seven continents. Its name derives from 'Terra Australis' which means 'Land of the South'. Informally known as 'Down Under', it includes mainland Australiaand the islands of Tasmania and New Guinea. Australia is the driest inhabited continent. Apart from Antarctica, no other continent is as inhospitable. However, it has a rich and diverse wildlife.

Now, seven of Australia's most iconic species have been commemorated in a stunning collection of seven precious official gold coins - as unique as the Australian 'BIG 7' themselves.

Now all seven animals are exquisitely engraved on the 'Big 7 Australia' gold coins in the original collector's set, that has fascinated collectors. It is rightly considered the perfect homage to the diverse variety of species and the natural beauty of Australia. Experts agree: the 'BIG 7 Australia' coin set of gold coins commemorates the rich diversity of Australian wildlife in the most beautifulway!

The 7 official gold coins are:
The Koala
The Tasmanian Devil
The Wombat
The Echidna
The Kangaroo
The Emu
The Kookaburra