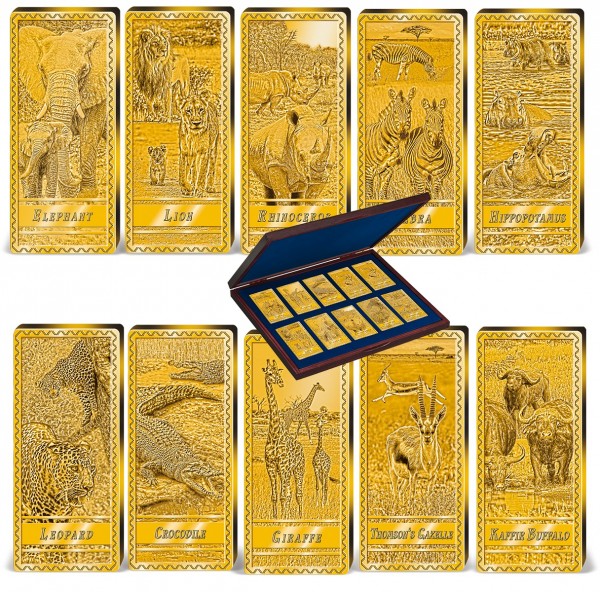 95 years ago, in 1925, the Belgian King Albert I established the first ever African national park and wildlife reserve. The Virunga National Park, originally named Albert National Park, is situated in the Democratic Republic of Congo and was one of the first protected areas in Africa.

Many African animals are on the endangered list due to poaching, hunting and habitat loss.The African National Parks work hard to protect and preserve the continent's stunning variety of wildlife. Now, for the first time, a beautiful set of golden bars has been issued, featuring the most amazing and iconic African animals. Finished with pure 24-carat gold, this strictly limited rarity is a perfect keepsake to document the magnificent African wildlife.

This meticulously designed, strictly limited international set features stunning, detailed motifs dedicated to the most amazing and most famous African animals: the majestic Kaffir buffalo, the elephant, the hippopotamus, the giraffe, the crocodile, the leopard, the lion, the rhinoceros, the Thomson's gazelle and the zebra.

Each golden bar in this set is fully layered with 24-carat gold and presented in its own protective capsule to preserve it for generations to come - a true collector's item. As this set is strictly limited to only 3,333 complete sets worldwide and only a small allocation has been given to each individual country, we recommend acting quickly if you would like to secure one of the few sets for yourself.