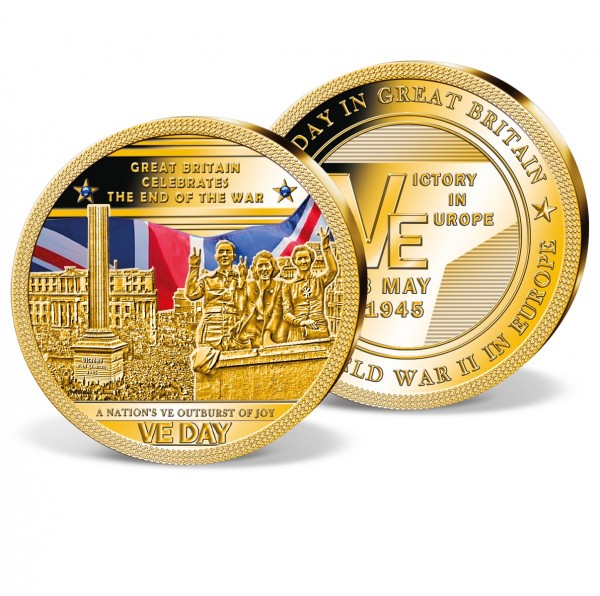 VE Day - 'Victory in Europe Day', was celebrated on 8th May 1945, when Prime Minister Winston Churchill officially announced the end of WWII in Europe. The unconditional surrender of all German forces was signed on 7th May 1945 in Reims, formally ending the war in Europe. Millions of people in Britain and the Allied countries exuberantly celebrated the defeat of Nazi Germany.

Across Britain people celebrated the end of the war with spontaneous street parties, dancing and singing. Red, white and blue bunting lined the streets of Britain, as it was announced it could be purchased without using ration coupons. A national holiday was declared in Britain for 8th May, and events including parades, thanksgiving services and street parties were organised to mark VE Day. St Paul's Cathedral in London held ten consecutive services for people giving thanks for peace, each attended by thousands of people.

Winston Churchill was the man of the hour. At 3pm on 8th May, he addressed the nation in a national radio broadcast, and announced that the war in Europe was over. Churchill celebrated from the balcony of Buckingham Palace, waving to the cheering crowds together with King George VI and the Royal family. The King praised the British endurance and paid tribute to those who did not live to see the end of the war: 'Let us remember those who will not come back... Let us remember the men in all the services, and the women in all the services, who have laid down their lives. We have come to the end of our tribulation and they are not with us at the moment of our rejoicing.'

75 years after the end of the war in Europe, VE Day is celebrated all over the country with concerts, services, exhibitions and street parties. In commemoration of this historic day, a giant strike has been issued, preciously layered with 24-carat gold and hand-set with genuine SWAROVSKI® ELEMENTS.