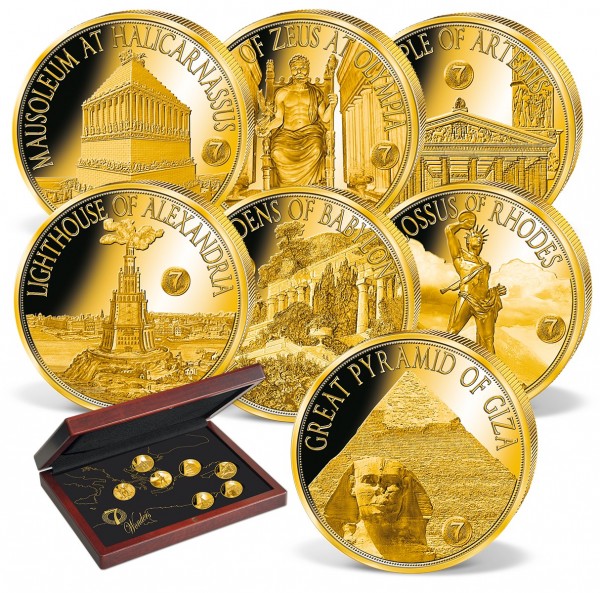 They commemorate the most impressive and remarkable works ofart and architecture built during antiquity - the Seven Wonders of the Ancient World. For example, the Great Pyramid of Giza originally stood nearly 150 metres high, and was the tallest man-made structure in the world for over 3,800 years. The Hanging Gardens of Babylon are the only ancient wonder whose exact location remains unknown, but legend says they were planted on a man-made step pyramid, over 120 metres wide on each side, built to resemble a large green mountain. The Colossus of Rhodes was a huge bronze statue of Helios, the Greek sun god, which stood over 36 metres high and weighed 12tons. The statue was built by the citizens of Rhodes in gratitude for the defeat of the invading army of King Demetrius in 305 BC.

Now, seven stunning gold coins have been issued to commemorate the Seven Wonders of the Ancient World. These official gold coins celebrate these amazing monuments that are testament to the extraordinary imagination and abilities of human beings. All seven original coins are minted in finest gold as official currency in the issuing country.