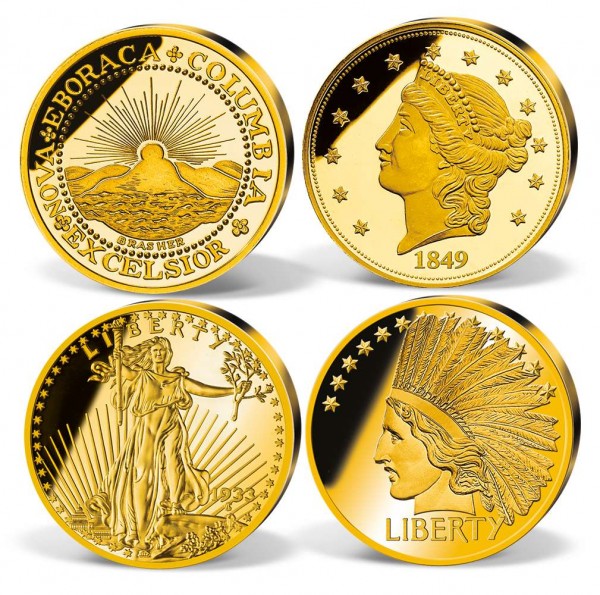 This product is currently not available.
Please inform me as soon as the product is available again.
Amount due: £1,196.00

1849 Liberty Head Double Eagle Pattern Coin
The first gold Double Eagle ever minted in the U.S. was minted in 1849. However, only one coin was produced as a pattern. That sole existing specimen now resides in the Smithsonian Institution and cannot be sold,but experts estimate its value at $20 million.

1933 Saint-Gaudens Walking Liberty Double Eagle
When America banned private ownership of gold in 1933, only a handful ofGold Double Eagles escaped the melting pot. Two were given to the Smithsonian and a handful were secreted away by the Mint's chief cashier. One missing coin resurfaced at auction in 2002 where it soldfor a record $7.6 Million!

1787 Brasher Doubloon
Before there was a U.S. Mint, private minter, Ephraim Brasher produced a limited number of gold coins for New York. Known as doubloons, each hand-stamped coin bore the maker's initials somewhere on the reverse. With only 7 of these historic treasures known to exist, it is understandable why the only existing breast-initialed specimen sold in 2011 for an astounding $7.4 Million!