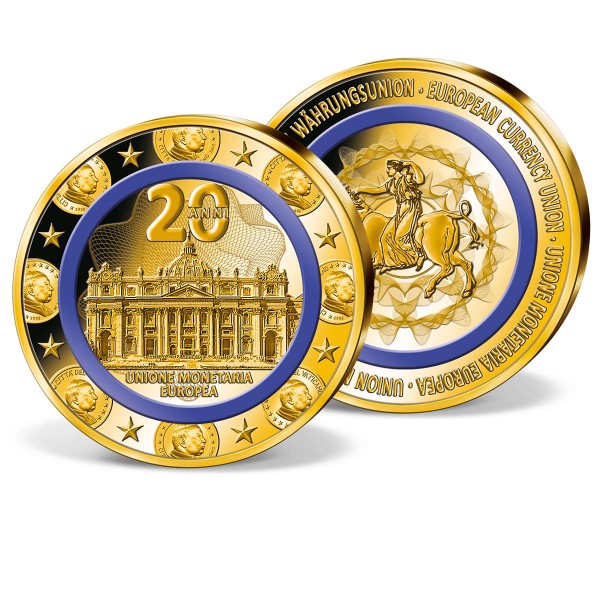 Description
Description
In 1999 the Euro first entered the stage of international currencies as accounting currency. On... more
Close menu
'20th Anniversary of the Euro' Commemorative Strike

In 1999 the Euro first entered the stage of international currencies as accounting currency. On 1 January 2002 the time of national currencies ended in Austria, Belgium, Finnland, France, Germany,Greece, Ireland, Italy, Luxembourg, the Netherlands, Portugal and Spain and in the small states of San Marino, Monaco and the Vatican. Today, 343 Mio people in 19 countries pay in Euro.

Thebackground of a joint European currency was not only political, but also economical - the European Currency Union was supposed to curb currency fluctuations within Europe. The European currency systemwas initiated in 1979 by Germany and France. In 1989 the EU countries agreed on an economic and currency union in three steps. During the negociation of the Maastricht Treaty of 1992, the UK securedan opt-out from adopting the Euro.

Euro coins are minted by each Euro state with a countryspecific reverse - Euro banknotes are only distinguished by different letters of the serial number.Many British collections of Euro coins were started by bringing back different coins from holidays in Europe and even when the Brexit decision of 2016 makes any future introduction of the Euro in Britain practically impossible, we join our European neighbours and friends in wishing the Euro a 'happy 20th anniversary'!

Exclusive to Windsor Mint, this '20th Anniversary of the Euro' commemorative strike is strictly limited to only 9,999 complete collections worldwide and layered with 24-carat gold. It is a stunning tribute to an exceptional anniversary.