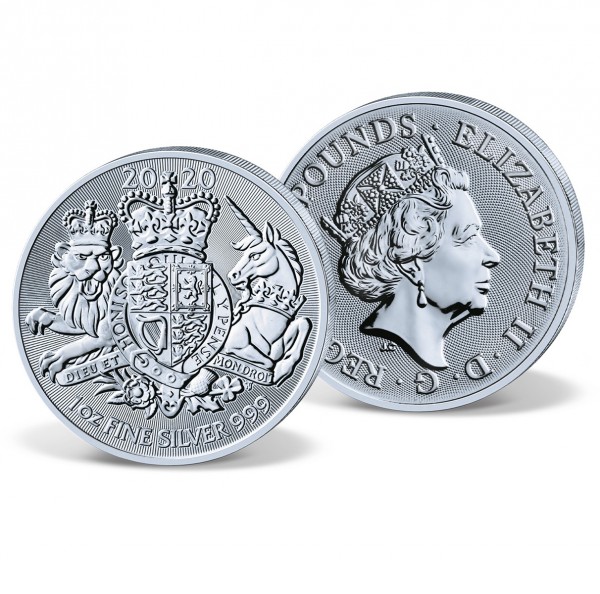 This product is currently not available.
Please inform me as soon as the product is available again.
Amount due: £99.95

Our Royal Mint has a proud tradition of minting beautiful silver and gold coins, that are highly sought-after all over the world by collectors and investors alike. Now, a brand new silver bullion coin has beenissued, preciously minted from one ounce of finest silver.

This significant 2020 silver coin features the Royal Arms on the reverse, a symbol of strength, this respected emblem of our monarchy is the official Coat of Arms of the United Kingdom of Great Britain and Northern Ireland. The Royal Arms can not only be seen on our coins, but also on British passports, official government documents and Royal Warrants. The design on this new beautiful silver coin has been created by Timothy Noad.

The obverse of the coin, as all British coins, shows the most recent portrait of Her Majesty Queen Elizabeth II, created by Jody Clark, and the official face value of the silver coin. However - due to the silvercontent of the coin and the strict limitation to 2020 mintage only, the official issue price to collectors and investors is higher, as this silver bullion coin will not be found in circulation.