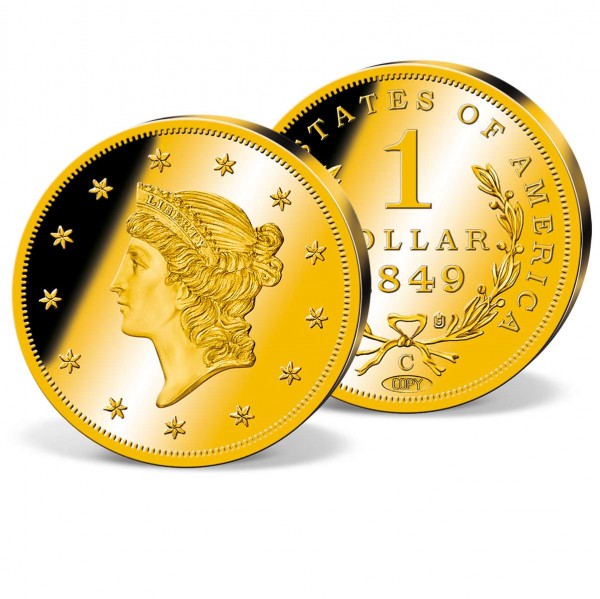 This product is currently not available.
Please inform me as soon as the product is available again.
Amount due: £72.00

When James Barton Longacre became the fourth Chief Engraver at the U.S. Mint in 1844, he was not well-received by the Mint Director and the Head Coiner of the Mint. When Longacre was selected by Congress to design the new one-dollar and twentydollar coins, the directors tried to have him fired. Longacre prevailed and so began the career of one of the greatest coin designers in U.S. history.

The very first coin he created was the Liberty Head Gold Dollar. First minted in 1849, the coin actually had two reverse designs - the closed wreath and the open wreath. The Liberty Head Dollars that were minted at the Mint facility in Charlotte, NC (C), that year were all thought to be of the closed wreath variety. It wasn't until the early 1900s that the 1849-C 'open wreath' variety wasdiscovered. Today, only five examples of this Longacre masterpiece are known to exist.

Issued by American Mint and in Europe exclusively available from Windsor Mint, this solid 14k gold replica is meticulously reproduced from John B. Longacre's rare 1849-C Gold Liberty Head Dollar with the open wreath reverse. Minted in the highest quality 'Proof', this American Mint authorized limited edition replica of this incredibly rare coin comes in its own protective capsule to preserve it for generations to come.