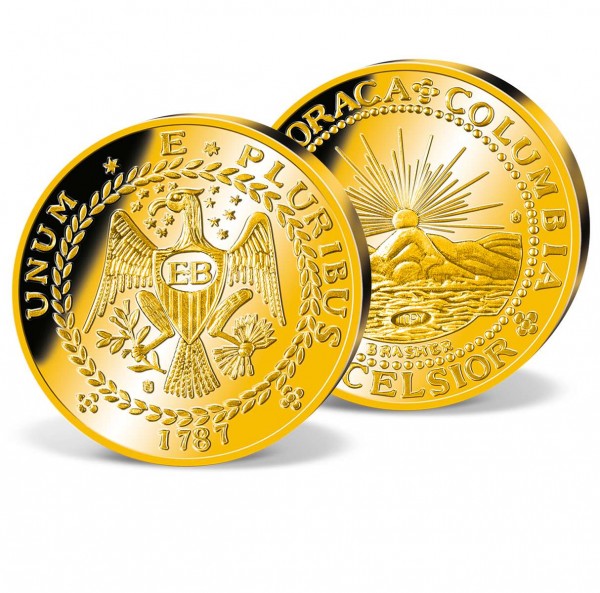 Description
Description
The original, struck from 22 carat gold, is one of the most expensive gold coins in the world:... more
Close menu
'1787 Ephraim Brasher' Replica

The original, struck from 22 carat gold, is one of the most expensive gold coins in the world: the Brasher Doubloon is considered as one of the first dollar coins of the United States and is rightfully recognized as one of the greatest numismatic rarities of the world.

In 1787, Ephraim Brasher, the famous New York silversmith and goldsmith mand neighbour of George Washington, designedthis coin and immortalised himself in his work. Under the pastoral illustration on the obverse of sun, hills and sea he wrote his surname; on the reverse he imprinted his initials. Today only six surviving examples remain of his version with the oval moulding on the eagle's wing and only one with the initials 'EB' on the eagle's breast. In December 2011, this sole surviving piece was auctioned for $7.4 million - or 4.8 million pounds sterling! The equivalent value of the gold in 1787 was around $15 or, at today's exchange rates, about £10!