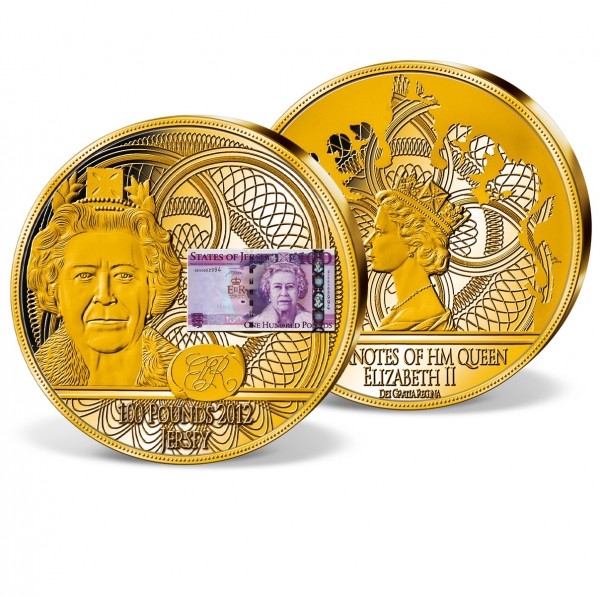 Description Benefits of our Collector Service
Description
Queen Elizabeth&bspII has been our Head of State for 68&bspyears - not only for the United... more
Close menu
'100 Pounds Queen Elizabeth II - Jersey' Supersize Commemorative Strike

Queen Elizabeth&bspII has been our Head of State for 68&bspyears - not only for the United Kingdom, but also for 15&bspother countries of the Commonwealth. Since the death of the Thai king Bhumibol in 2016, she is now also the world's number one of the oldest, active monarchs.

As her father's successor, Queen Elizabeth&bspII was proclaimed Queen at the age of twenty-six. In 1977,she celebrated her silver jubilee, in 1997 gold and in 2012 the nation joined in her Diamond Jubiliee festivities. At her coronation in 1953, she promised: 'I declare before you all that my wholelife whether it be long or short shall be devoted to your service and the service of our great imperial family to which we all belong&bsp...'

Seven different denominations were issued at the time and the 100&bsppounds note is now one of the most beautiful banknotes of Queen Elizabeth&bspII. The Queen is an exceptional phenomenon amongst the world's monarchs: she has been representing the United Kingdom and the Commonwealth for 68&bspyears! This makes her the world's longest reigning monarch!

The first banknote of Queen Elizabeth&bspII in her role as our monarch was issued in 1960 - 60&bspyears ago. No monarch has since been portrayed more often and the banknotes of Queen Elizabeth&bspII are a firm favourite of collectors worldwide. One of the most beautifulbanknotes without a doubt is the 100&bspPounds Jersey note, issued in 2012 in celebration of Her Majesty's Diamond Jubilee. This beautiful note has now been honoured with a stunning commemorative strike, layered with 24-carat gold.