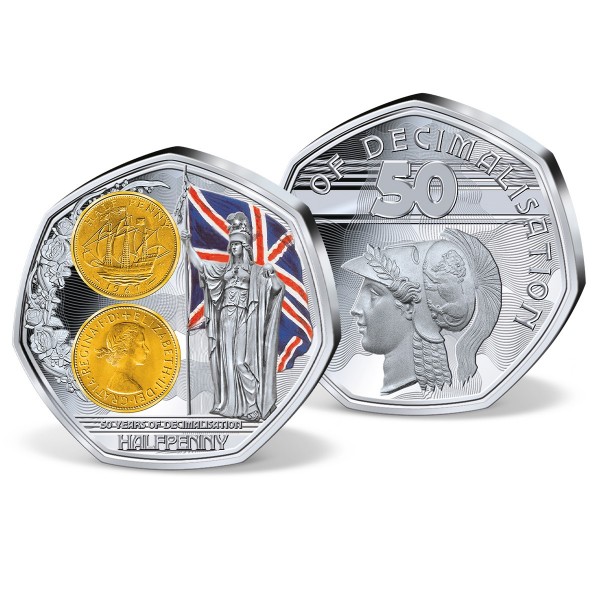 Celebrating 50 years of decimalisation - this exclusive 'Halfpenny' commemorative strike has been struck in the iconic shape of a 50 pence coin. Minted in the highest quality 'PROOF' andlayered with finest silver and spot gold, this stunning commemorative is strictly limited to only 1,971 complete collections worldwide.

50 years ago, on 15 February 1971, oneof the most important events in the history of British coinage took place - decimalisation!

Decimal currency began to spread throughout Europe in 1795, when France introduced the franc of 10 decimes and 100 centimes. Dividing currency into units of 100 spread throughout Europe over the centuries through the Latin Monetary Union. In 1971, Decimal Day began the 18-month longchangeover of the British pound. Previously it was divided into 20 shillings of 12 pence each, now it was 100 pence.

Immediately after the changeover the decimal penny becameknown as the new penny. The old pennies were withdrawn, but the old shillings remained in circulation for some time as 5 pence coins. The term 'new pence' was used between 1969 and 1981 for thefirst strikes of all decimal coins, to clearly distinguish them from the old pre-decimal coins. Before decimalisation, it was still possible to find coins in circulation dating back to the 19th century. This was especially true of the halfpenny and one penny coins.

This unique 'Halfpenny' strike, commemorates a significant milestone in the history of British coinage. Fully layered with pure silver and spot gold, it truly is an essential addition for any British collection.