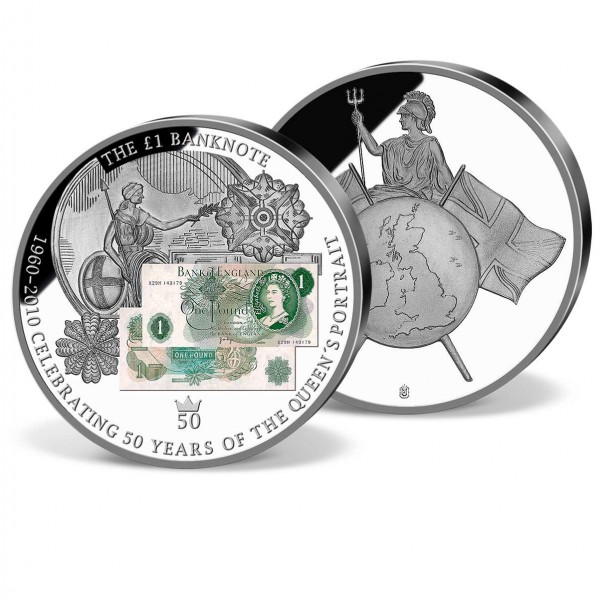 Description
Description
We perhaps take it for granted that the image of our monarch appears on our currency, but in... more
Close menu
'£1 Banknote C - 50th Anniversary' Commemorative Strike

We perhaps take it for granted that the image of our monarch appears on our currency, but in fact it was sixty years ago in March 1960 that for the first time ever in the Bank of England's long history the portrait of a reigning monarch appeared on our Banknote design.

Up until that time Britannia had been the only 'person' to be depicted on Bank of England notes. Designed by RobertAustin, the first note issued in this brand new C series was the green £1 note, it depicted the Queen wearing the Diamond Diadem. This series has now become known as the 'Portrait' series of notes andthe £1 note was followed in 1963 by the 10/- note. Interestingly The Queen had agreed as early as 1956 for her portrait to be used on banknotes, but the designs never made it into production, purportedly because the portrait designs could not be agreed upon.

Today, the portrait of Queen Elizabeth II appears on the banknotes of more countries than any other monarch..